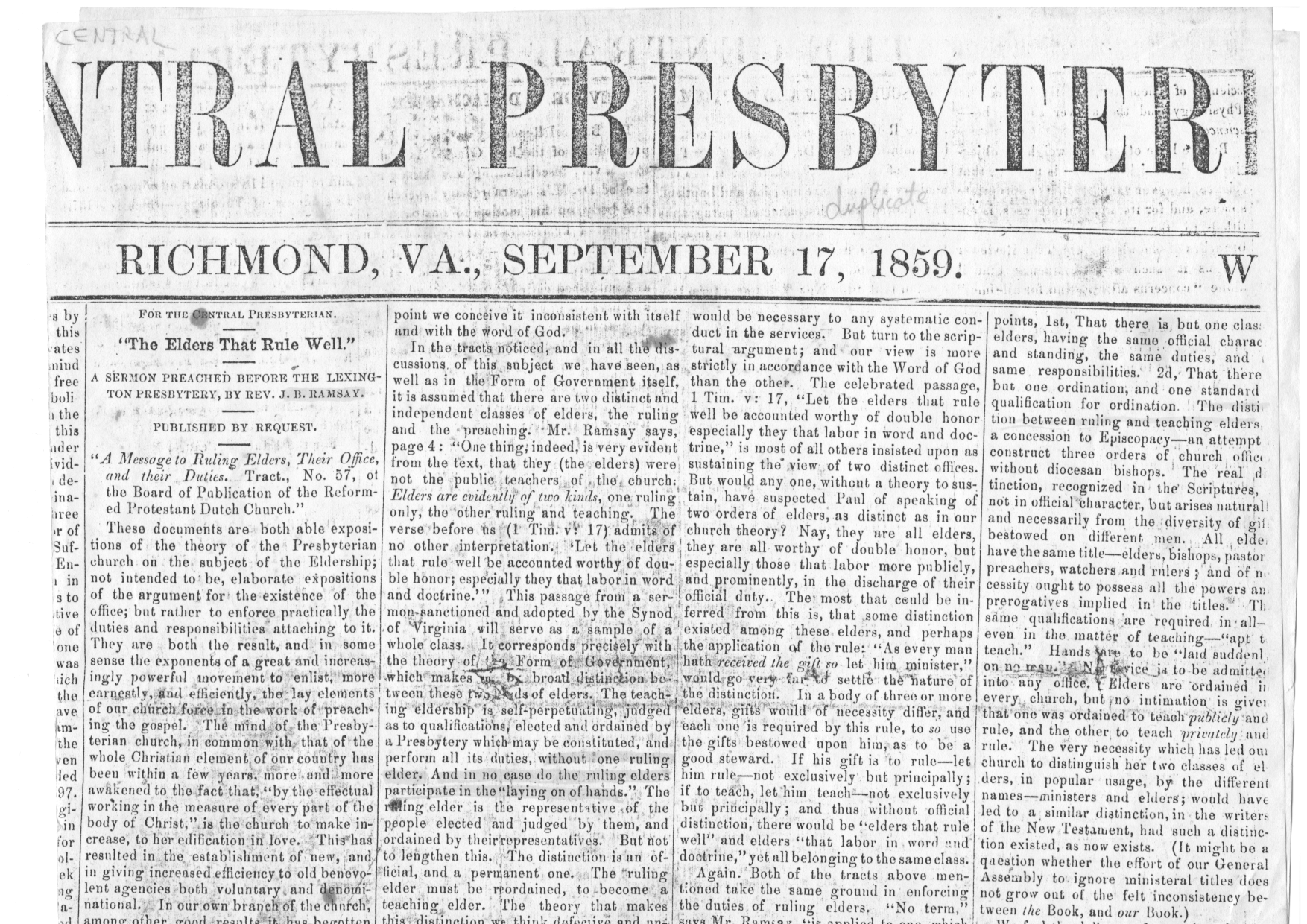 Extra, extra. Read all about it.

It concerns the feeble attempt to essentially create a parish priest, also known as a clergyman and referred to as the teaching elder. In so doing, the remaining elders become muted ruling elders or lay-elders. Problem is, all elders must be able to teach, according to the Scriptures.

The article is a font-page review of two publications about this "ruling eldership", from the Central Presbyterian newspaper for September 17, 1859. (Many Baptist and Methodist groups also followed the same course, btw.) The Reviewer is Cramer - not likely his real name, due to the controversial nature of his words. No doubt.

Here are a few highlights for your consideration and discussion. Hopefully we can integrate the truth into our own situations, as they might apply. The subject will undoubtedly come up before long. Just to clarify, the Reviewer here is doing two book reviews and the distinction he repeatedly mentions and opposes is that of teaching and ruling elders.

"Uniting with the authors in lamenting the inefficiency of our church, the Reviewer lays it down that "the theory of the Presbyterian church is defective in regard to the office of the eldership and that defect militates against her efficiency in this work. And perhaps lays the foundation for most of her deficiencies in other respects. We accept Presbyterianism as a thoroughly scriptural system in its doctrines and in all essential points of government. As a whole we believe it impregnable but in one point we conceive it inconsistent with itself and with the Word of God."

"In the tracts noticed and in all the discussions of this subject, we have seen, as well as the Form of Government itself, it is assumed that there are two distinct and independent classes of elders, the ruling and the preaching. The teaching eldership is self-perpetuating, judged as to qualifications, elected and ordained by a Presbytery which may be constituted, and perform all its duties without one ruling elder. And in no case do the ruling elders participate in the 'laying on of hands.' The ruling elder is the representative of the people elected and judged by them, and ordained by their representatives. The distinction is an official and permanent one. The ruling elder must be re-ordained to become a teaching elder. The theory that makes this distinction we think defective and unscriptural. That there is a distinction between ruling and preaching elders made in the Scriptures, we admit; that it is official or permanent — we deny. In order to show this, we propose to examine briefly the common arguments for the office of ruling elder."

Cramer, the Reviewer, then takes up the argument for such a distinction from the Synagogue, and show that it is based upon ignorance of real facts, and upon contradictory and uncertain traditions, and is clearly against Scripture in 1 Timothy 5:17. That passage he avers, "does not necessarily, nor even naturally, make an official distinction," and it is the only one he has been able to discover. "Some passages speak indeed of 'governments' as distinct officers in the church, and also of 'teachers.' But if the 'teachers' include the 'governments,' by a parity of reasoning, the 'governments' might also include 'teachers,' and we would have still but one office.

It may be very well doubted whether the whole of this theory is not a false one. It proceeds on the ground that teaching being the higher office of the two, necessarily includes the lower — which is only true when both offices belong to the same department of service. The first magistracy of our country, includes all the lower offices of the executive department, but not the judicial or legislative. And it can be just as easily proven, and by precisely the same argument, that the judicial branch of any government because it expounds the laws, includes the executive that executes them, as that expounding God's law includes governing in his house. Two things in fact are assumed without proof, in order to make an argument: 1st. That teaching is a higher office than ruling; and 2d. That the higher must include the lower — both of which are, to say the least, questionable."

This Reviewer next replies to the argument for the twofold distinction of ruling and teaching elders, based on the plurality of them ascribed to every church. This he conclusively refutes by showing that it has no force as applied to the incipient state of the church, when no limitation of territory was assigned to any church; when all were missionaries, and all was missionary ground; that in no instance is a hint dropped leading us to suspect that two offices bearing the same name are held forth, both of which may and must teach, but one class alone do this publicly.

"It seems clear to our mind that the whole argument by which the fundamental principle of the Presbyterian system is supported, is just as strong against this particular point in the system. It establishes these points: 1st. That there is but one class of elders, having the same official character and standing, the same duties, and the same responsibilities. 2d. That there is but one ordination, and one standard of qualification for ordination. The distinction between ruling and teaching elders, is a concession to Episcopacy—an attempt to construct three orders of church officers without diocesan bishops. The real distinction, recognized in the Scriptures, is not in official character, but arises naturally and necessarily from the diversity of gifts bestowed on different men.

All elders have the same title — elders, bishops, pastors, preachers, watchers, and rulers; and of necessity ought to possess all the powers and prerogatives implied in the titles. The same qualifications are required in all — even in the matter of teaching — 'apt to teach.' Hands are to be 'laid suddenly on no man.' No novice is to be admitted into any office. Elders are ordained in every church, but no intimation is given that one was ordained to teach publicly and rule, and the other to teach privately and rule. The very necessity which has led our church to distinguish her two classes of elders, in popular usage, by the different names — ministers and elders — would have led to a similar distinction in the writers of the New Testament, had such a distinction existed, as now exists.

"Both the documents noticed, and the whole course of our recent newspaper discussions show, that the mind of the church is awakening, if not to the view presented above, yet to an approximate one. Now if the present distinction be erroneous, it is not difficult to see the bad effect it must have on the efficient working of our system. More than perhaps any other one thing, it had contributed to produce the present apathetic state of the eldership, by degrading the office below the scriptural standard — by introducing incompetent and unqualified men into it — by relieving those well qualified for the duties from a sense of responsibility...

This, however, we may affirm, that if our view be correct, every elder would be required to possess some gift both for ruling and teaching, and to exercise the gifts bestowed upon him. Every one would be a teaching elder, authorized to perform all the duties of the ministry, whenever and wherever, in the providence of God, he might be called to do so. All need not give themselves exclusively to the work of the ministry, but all might be required to work, as occasion demanded. Some would still give themselves exclusively to the work, and occupy the same positions they now do, save in the matter of official distinction. Rules might be adopted in accordance with this view, regulating the exercise of gifts — even demanding some superior attainments in those given wholly to the work. Then, without the evils resulting from the system adopted by some other churches, we would have all their advantages for the effective occupancy of both new and partially supplied fields."

The article concludes: "If these views are true, they show a great evil in our system. If they are not true, we would be glad to see some more full and satisfactory presentation of the authority for our present distinction between teaching and ruling elders. Nor are we alone in this wish."

Search
Are you sure?
Please, enter a value here